Modest Fashion Outlet is a fashion label to empower migrant women and refugees that aims to continue the discussion about the humanitarian crisis in Afghanistan. 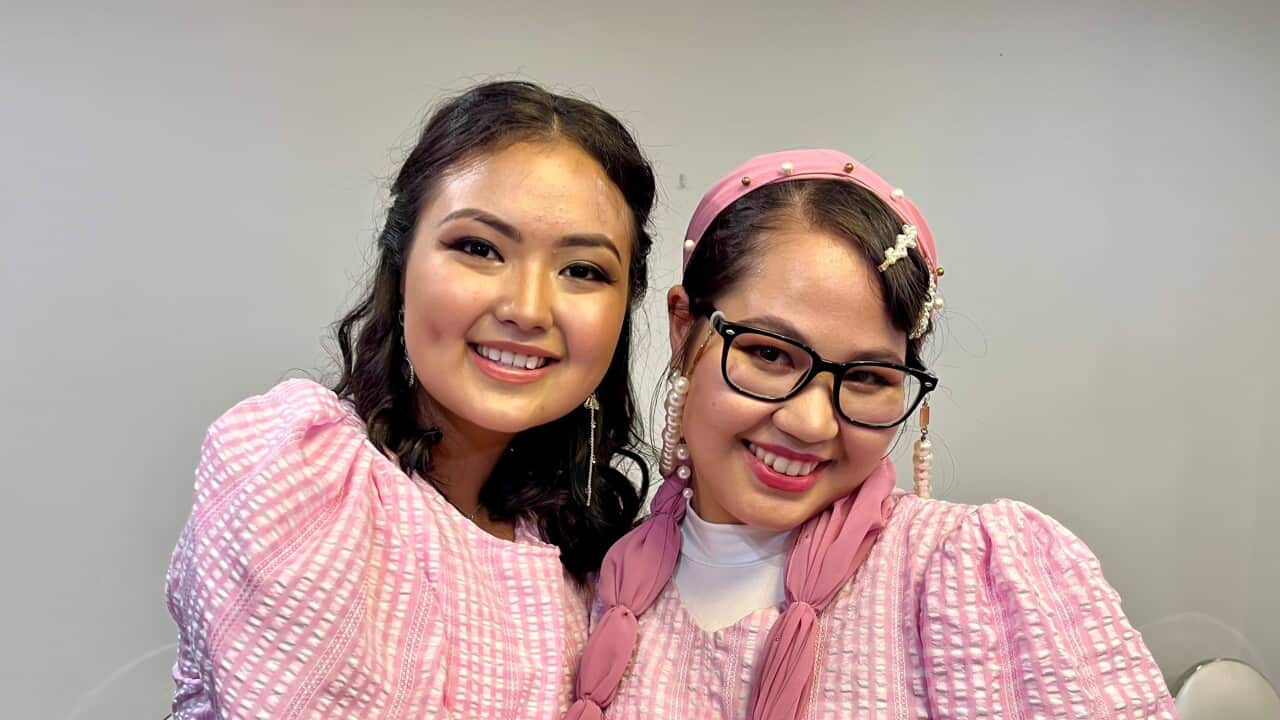 Parwin Taqawi (left) and Shaqaeq Rezai are empowering refugees and migrants from Afghanistan through their business Modest Fashion Outlet based in Sydney. Source: SBS / Monique Pueblos

Shaqaeq Rezai and Parwin Taqawi are the co-founders and designers at Modest Fashion Outlet. Together, the two best friends and refugees created an Australian fashion label inspired by the talent, resilience, courage and power of women from Afghanistan.
"We encountered a lot of women from our community that have really great skills in sewing, making clothes, garment making, pattern making and designing," Ms Rezai told SBS.

"However, they’re unable to put this into use because of language barriers and lack of experience working in Australia."

Ms Rezai said some of these women have had 10 to 20 years of experience in their craft, but didn't even know where to get a sewing machine once they came to Australia.

"We really wanted to create an environment where we could offer these women employment and opportunities to train, work, and just create a safe space," she said.

The 23-year-old said many of the women working for Modest Fashion Outlet had their own businesses and loyal clientele prior to fleeing Afghanistan.

"They completely lose that," she said.

"It really affects them mentally and when they're at home, they're isolated and lonely." 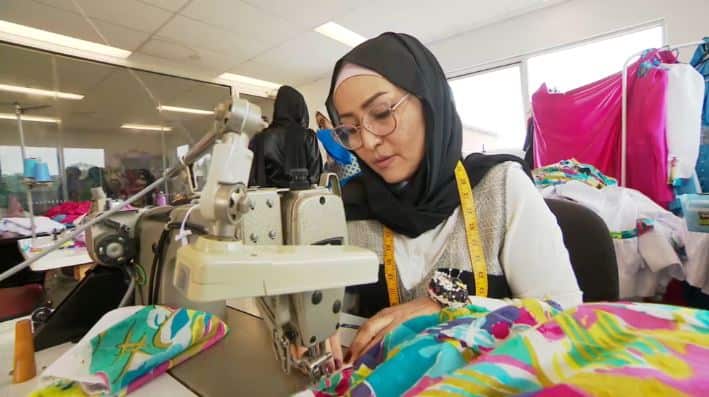 She told SBS News in Farsi: "It was very difficult for me and my daughter."

"I couldn’t communicate or easily socialise outside — it's okay now," she said.

Ms Ramazadi said she was embarrassed to work anywhere as she didn't know much English and felt she couldn't properly communicate with others.

"But, the moment Parwin called me and asked me to work here, it was really gratifying for me because it could both support me financially, and I was among those who speak my language," Ms Ramazadi, a sewing technician, said.

"It was both work and entertainment."

Ms Ramazadi was one of the many sewing technicians who put their talents on show for the launch of Modest Fashion Outlet's first-ever collection Sherzanan on Wednesday night in the southwest Sydney suburb of Fairfield.

As well as celebrating individuality, creativity and self-expression, every woman involved in the launch event has not forgotten the women in Afghanistan, where such an event is unimaginable. 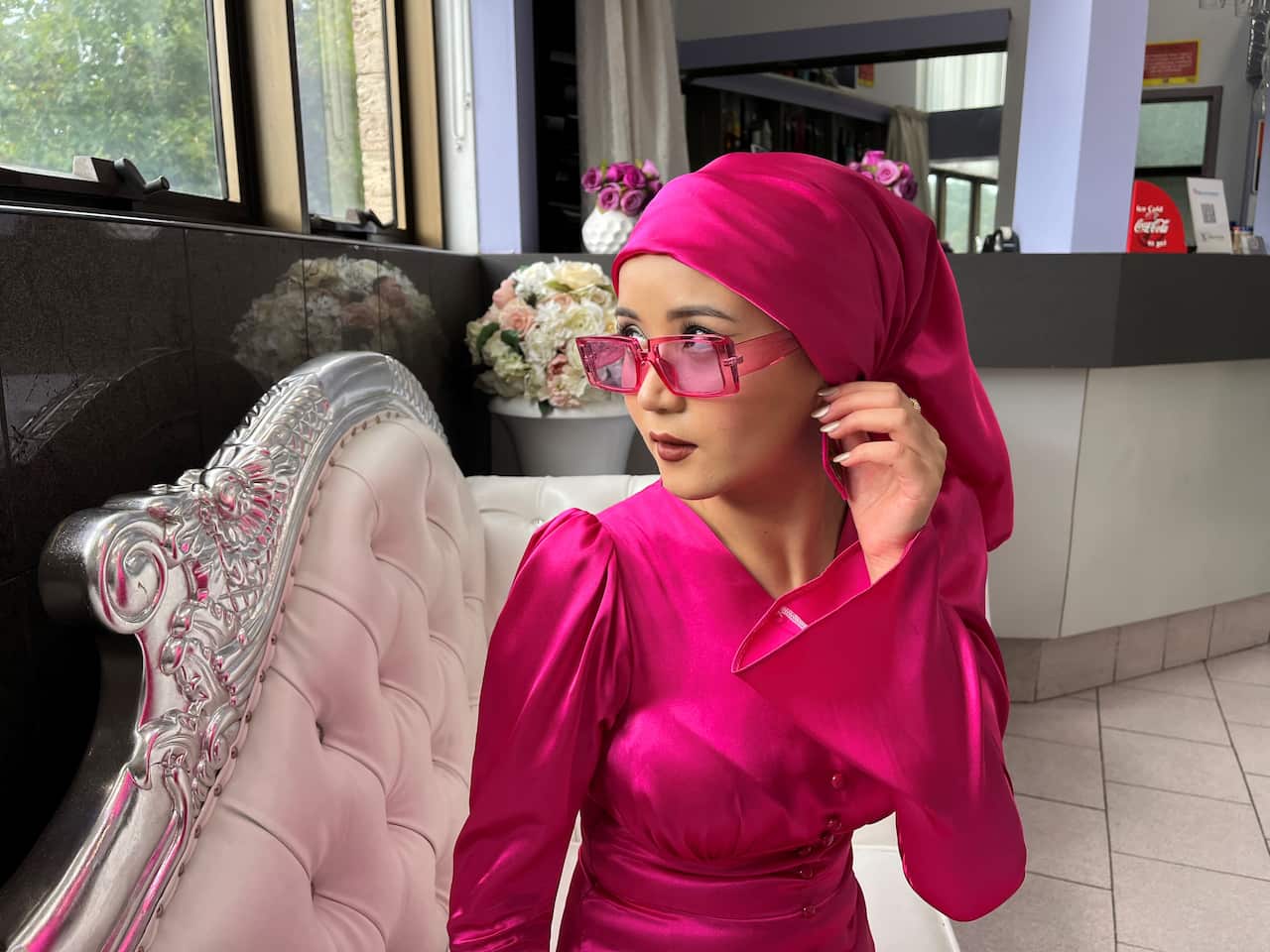 Nargis Nazari models one of the beautiful designs at the launch event of Modest Fashion Outlet's first collection. Source: SBS / Monique Pueblos
Women's rights advocate Tamana Mirzada said since the Taliban's takeover of Afghanistan more than six months ago, the world has watched great atrocities happen to the lives of women and girls.

"We have seen it from the ban of education, employment and the complete removal of the Ministry of Women," she said.

Ms Mirzada said the launch event of Modest Fashion Outlet's latest collection this week was important to continue the discussion on the humanitarian crisis in Afghanistan, especially with its impact on the role of women of all ages in the country.

"It’s really important we engage the Australian community and create a soft-point entry to talk about the current situation but also not forget the past achievements of these women and girls," she said. 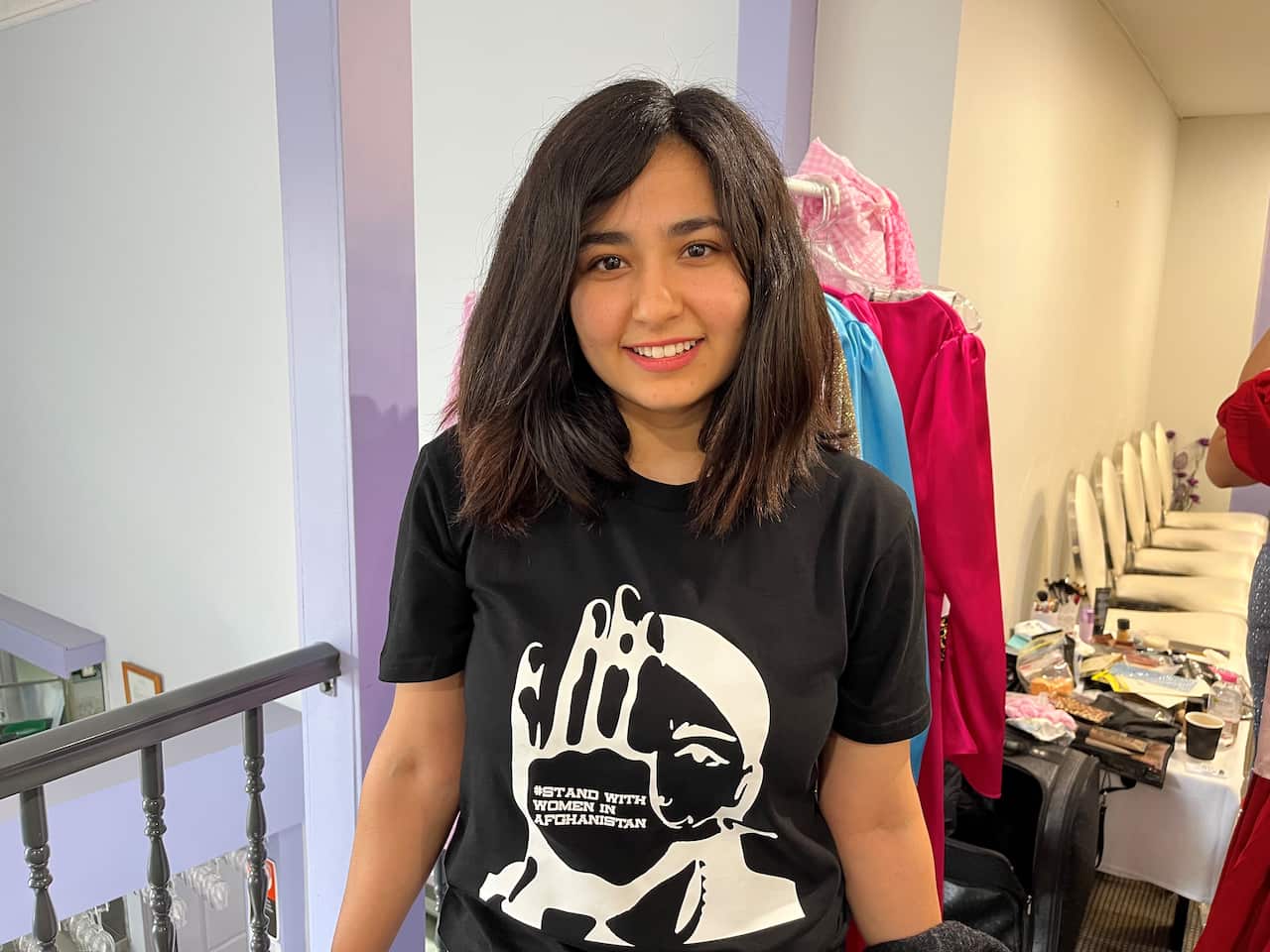 "All the women were working in society and now - we can’t even go outside," she said.

She told SBS she's felt like a refugee all 25 years of her life and through the adversity of being a woman in Afghanistan, she's learned a lot but not in a good way.

"I didn’t decide to be a refugee." 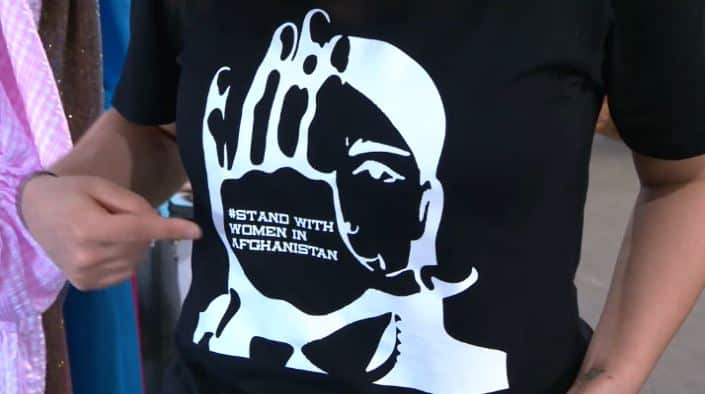 Hasiba Ebrahimi made a t-shirt to reinforce the message to stand with women in Afghanistan. Source: SBS / Monique Pueblos
Ms Ebrahimi says she chose acting as a career not only to represent herself but her community and culture as well.

Since moving to Australia a year ago, she has continued her plight in keeping up the conversation about women of Afghanistan.

"I have to talk and I will talk about it."

More than 120 community members came together in solidarity at the fashion show to reflect on the struggles and achievements of all women from Afghanistan, especially those in their local community.

On the runway, 13 exquisite designs were brought to life fusing tradition and modernity. 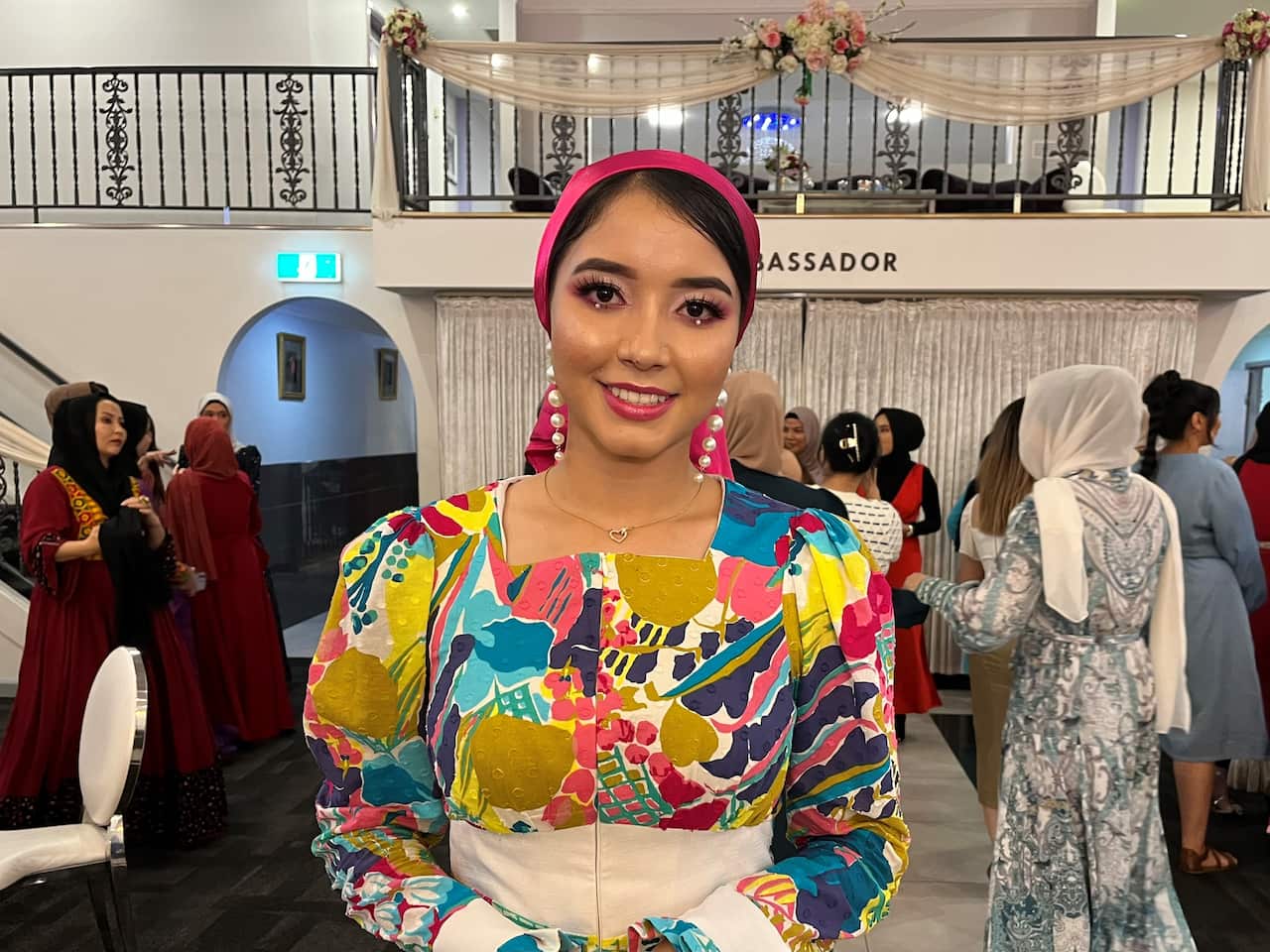 "I think it was absolutely incredible," Ms Sadequi said.

"I felt so empowered just about being me and representing my culture and identity," she said.

Modest Fashion Outlet's co-founders said their fashion label has always been driven by change and aims to create a lasting social impact for women with diverse backgrounds.

Ms Rezai's family of eight fled from Iran in 2013, while Ms Taqawi fled Pakistan as a young girl with her parents and two younger brothers in 2014.

Having worked closely with newly arrived communities in Australia once they reached their teenage years, the two young women met during an event they both volunteered at.

Their passion for fashion, community and social justice bonded the two young women together.

Witnessing the positive impact the active involvement of women in society brings, Ms Taqawi said it's imperative Australia remembers the women who do not have the freedom to live the life they wish.

“It is crucial that women of Afghanistan enjoy the same rights as we do here in Australia," she said.

"Whilst we celebrate here, we must not forget those women whose rights are still denied."
Back to blog
Accessibility
Adjust text colors
Adjust heading colors
Adjust background colors
Powered by CodeInspire ↗